I’d love to learn how to bake polymer clay so it looks like the photo above, without yellowing or cracking.  It’s easy to avoid a color shift if the temperature isn’t too high, but then the clay is more susceptible to breakage.  Somewhere there’s a balance.

To find what works, I first made swatches of four different brands of clay: Kato, Premo, Soufflé and Fimo.  All clay was well-conditioned. Then I baked them using these four methods:

Polyester fiberfill can make little lines on the clay, so I didn’t test that option.

When the swatches were cool, I tried to break them by bending them until the short ends met. Rather radical, but that’s OK.

I tried to follow the manufacturer’s recommended temperatures which are:

I live at 85oo feet which means I may need to increase temperatures and/or bake times.  If you live at a lower elevation, the temperatures I’ve used may be too high for you.

I’d previously learned that more heat or the correct heat for a longer time should solve the breakage problem.  I tried different temperatures and durations. In the process, some yellowed or browned.

I also tried mixing the more flexible clays (Fimo and Soufflé) with less flexible clays (Kato and Premo) and baking them at different temperatures until they didn’t break.

The color shift in Fimo/Kato might be reduced if baked at 275˚ for 30 minutes covered with tin foil. I haven’t tested it. Fimo/Kato baked at 265˚ for 30 minutes didn’t shift color, but it broke. The problem is Fimo has the lowest recommended baking temperature and Kato has the highest.  Not the best combination.

Following are photos of swatches that broke. Hopefully you can read my handwriting.

Another thing that didn’t work for me was one big ceramic tile covering the whole bottom of the baking box, as shown in the photo below.  When I tested the temperature inside, it was 100˚ lower than the dial. The tile must have blocked the heat.  I had to crank the oven up to 430˚ to reach 300˚ inside the baking box.  It made the whole garage smell and there wasn’t even clay in the oven, so I won’t do that again.

In conclusion, the methods with the least yellowing and without cracking seem to be as follows:

Fimo was the most flexible, but shifted color considerably when uncovered and shifted color a little in cornstarch.  The manufacturer recommends to not bake above 265˚F, no duration given. That’s a good temperature. Each was baked for 30 minutes, except I had to increase the cornstarch method to 40 minutes. The best methods for Fimo seem to be either covered with tin foil or in baking pans at 265˚ for 30 minutes.

Kato was strong, but less flexible.  It shifted color, but less so when under tin foil or in baking pans. The manufacturer recommends 300˚F for 10-30 minutes. Not to exceed 350˚F.  Baking at 300˚ worked well, though I had to increase it to 320˚ under tin foil. The best method for Kato seems to be in baking pans at 300˚ for 30 minutes.

It’s interesting how many clays did well being baked in baking pans. I’m going to adopt that as my new method of baking.

NOTE: Covering the clay does affect the temperature.  Please see my other posts on oven temperature to consider whether and how to compensate for this.

I baked the test swatches translucent clay shown in the photo below.  The more they  were baked, the more yellow or orange they became.  Then, I had to see if they’d break.

Following are the lowest temperatures and baking times that I tried where the swatch didn’t break and there was the least yellowing:

I expected the translucent Premo to break like the white Premo did, but I was pleasantly surprised.   I understand that mixing translucent Premo with opaque Premo makes it less likely to break.  In one subsequent test, Premo still broke when mixed 1/2 white and 1/2 translucent. I did a second test and it didn’t break.

Kato was so tough I almost couldn’t bend it. When I did, a white area appeared in the middle.

I hope this will give you a starting place for your own tests.  Please let me know if you have other results that might be helpful.

I have to say I’m a bit relieved that cornstarch didn’t do as well. It’s messy, it sometimes seems to change the texture of the surface of the clay and you have to figure out how to keep your clay flat, if flat is what you want.  However, I did find cornstarch a lifesaver when baking this tiny Fimo rose, so it all depends upon what you’re doing. 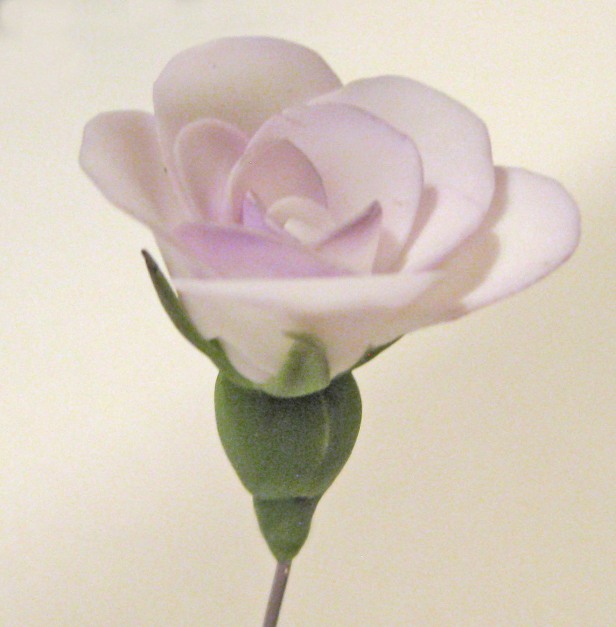 P.S. I bought all these products myself and received nothing from the manufacturers.

4 thoughts on “Baking Polymer Clay Without Yellowing or Cracking”